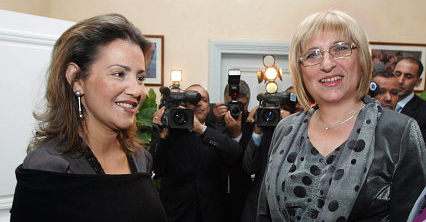 National Assembly President Tsetska Tsacheva met with Her Royal Highness Princess Lalla Meryem - the elder sister of King Mohammed VI of Morrocco. Bulgarian parliamentary delegation, led by the president of the National Assembly, is on official visit to Morocco at the invitation of the Speaker of the House of Representatives of Morocco Abdelwahed Radi.

Tsacheva assured Princess Lalla Meryem that Bulgaria recognizes the accomplishments of Morocco in the political, the economic and social area under the leadership of King Mohammed VI, and fully supports this country's strategic choice of closer ties with the EU.

"In my capacity as the first woman leader of the Bulgarian Parliament, I cannot but observe with satisfaction the opennes of the royal institution of Morocco to women's competences," Tsacheva said.

Tsacheva said she is ready to support any initiative that would broaden cultural dialogue between the two countries. Princess Lalla Meryem chairs a Children’s Parliament in Morocco. The Speaker of the National Assembly briefed her host on the special educational programme of the Bulgarian Parliament whereby students and youths can visit the National Assembly on a daily basis.

The delegation includes the Deputy Speaker of parliament Pavel Shopov (PG of Ataka Party), the Chairman of the Group for Friendship between Bulgaria and Morocco Chetin Kazak (PG of the Movement for Rights and Freedoms), the deputy chair of the Committee on Economic Policy, Energy and Tourism Delian Dobrev / PG GERB / and the two deputy chairs of the parliamentary group for friendship with Morocco Yoanna Kirova (PG GERB) and Cornelia Ninova (PG Coalition for Bulgaria).

On December 6, 2010 Tsetska Tsacheva and the delegation are to meet the Speaker of the House of Representatives of Morocco Abdelwahed Radi and with the Speaker of the House of Counsillors Sheikh Mohammed Byadilah. The Bulgarian parliamentarians are to confer with the Prime Minister Abbas El Fassi. The delegation will also meet with Foreign Minister Tayeb Fassi-Fihri and the Minister of Industry, Commerce and New Technologies Ahmed Chami.

An important event during the visit’s second day is the signing of an Agreement on Cooperation in the field of Industry between the Government of the Republic of Bulgaria and the Kingdom of Morocco. The schedule of the visit includes a meeting with the Minister of Social Development, Family and Solidarity Nouzha Skali.