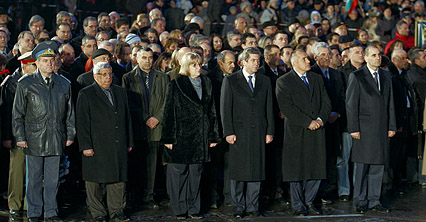 The President of the National Assembly Tsetska Tsacheva and members of the parliament have attended the ceremony on the occasion of the 138th years since the death of Vasil Levsky. The President of the Republic of Bulgaria, Georgi Purvanov, the Prime Minister Boyko Borisov, the Mayor of Sofia Yordanka Fandukova and the Sofia University “St. Kliment Ohridsky” rector Ivan Ilchev took part in the celebration. Flowers and wreaths were laid  at the monument of Vasil Levsky. The event was organized by the Sofia City Municipality, the Sofia Metropolitan Church, the All Bulgarians Committee and the “Vasil Levsky” Foundation. An address in memory of the Apostle was delivered by the University of Sofia  “St. Kliment Ohridsky” rector, Mr. Ivan Ilchev. The winner of the Sofia City Essay Competition, high school student Vesela Mincheva read her work in memory of Vasil Levsky.

Earlier in the day a memorial service dedicated to Vasil Levsky was held at the “St. Sofia” church.