National Assembly
of the Republic of Bulgaria
News
National Assembly President Tsetska Tsacheva has met the leadership of the Independent Trade Unions Confederation (CITU) and with some of the leaders of its member organizations like federations, trade unions and unions 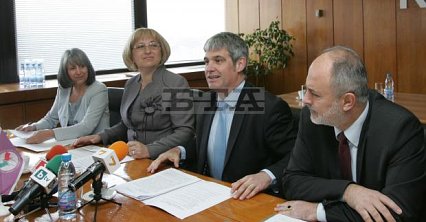 The meeting was held at the invitation of the CITU in its headquarters on 9 May, 2011 and was attended also by the Labor and Social Policy Minister Totyu Mladenov and the Minister of Justice Margarita Popova. The initiative coincides with May 9th – the Day of Europe and the beginning of the national campaign for protection of labor, social and union rights of the workers and employees in .

“It would be nice to celebrate the Day – May 9th with the confidence of Europeans, noted Tsetska Tsacheva – the accomplishment of this goal is still ahead. The implementation of this objective is very difficult but it is worth ensuring the citizens of Bulgaria a life with dignity, with rights and obligations, and freedoms, the same as envisaged by the other European Union members”, she added.

In her words, the efforts should be directed at making every Bulgarian feel like an European.

She praised the dialogue initiated by the CITU aiming at the introduction and enforcement of legislation protecting the workers’ rights. She mentioned the proposal of the trade unions concerning late payments of salaries. The payment could be enforced without a court ruling if the obligation of the employer could be proved.

She promised the proposals of the trade unions for urgent legislative amendments directed at better protection of the labor and social rights to be considered in the permanent committees of the parliament.