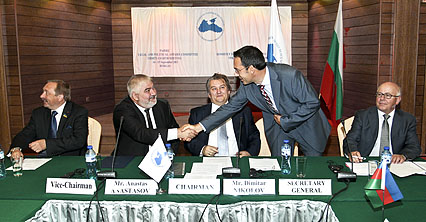 The Black Sea area is becoming very active economic region in the 21st century, National Assembly’s vice president Anastas Anastasov noted at the opening of the 38th Meeting of the Committee on Legal and Political Affairs of the Parliamentary Assembly of the Black Sea Economic Cooperation (PABSEC). The Bulgarian National Assembly is host of the meeting, held in the city of Burgas on 14 and 15 September 2011.

The parliament’s vice president pointed out that as member of the Organization for Black Sea Cooperation, Bulgaria attributes great importance to the activities conducted by the latter, which is the only intergovernmental organization in the Black Sea region. In his words, the forthcoming 20th anniversary since the creation of the Organization was an occasion to examine its past activities, achievements and weaknesses, but most importantly to outline the future steps necessary to reach higher intensity and efficiency of the cooperation. “In this respect, I would like to express again our decisive support for the idea to set up a specialized expert group with the task to start drawing the new economic agenda of our organization for the next decade”, Anastasov stated.

The vice president of the National Assembly noted that the Black Sea regional cooperation can develop successfully only if held in accordance with the integration processes taking place in Europe. The new policy of the European Union towards the Black Sea region, known as the Black Sea Synergy uncovers serious opportunities for regional level interrelations, but also poses challenges on how to find out the particular ways and approaches to the development of the partnership between the region and Europe. In his words this could be achieved through  intensifying  the political dialogue on all levels, as well as through the implementation of particular projects of regional, sub regional and all European importance.

He also said the forthcoming discussion at the meeting namely: “ Implementation of the agreements between the members states in the field of combating organized crime” presents a good opportunity, at the eve of the 20th anniversary of the Organization for Black Sea Cooperation, to strike the balance between the efforts of the past twenty years in the fight against organized crime in the Black Sea region and the future prospects for cooperation and their further enhancement.

“It is obvious that the global character of organized crime dictates that the fight against it can not be carried out with the capabilities of a single state, but in close cooperation with other countries in the region and globally”, pointed out the vice president of the National Assembly. He further added that in this context the Black Sea Economic Cooperation Organization had the potential to stimulate the cooperation between the member countries on the level of their governments and parliaments.

The 38th Meeting of the Legal and Political Affairs Committee of PABSEC was opened by his president Mihail Emelianov. The forum is attended by representatives of the 12 member countries, observers and guests. The key report covering the implementation of the agreements regarding the combat against organized crime was delivered by the vice president of the Bulgarian delegation to PABSEC Mr. Stoyan Guzelev.
The Parliamentary Assembly of Black Sea Economic Cooperation is the parliamentary dimension of the Organization for Black Sea Economic Cooperation. The latter is an international regional organization for economic cooperation between the countries of the Black Sea comprising Albania, Armenia, Azerbaijan, Bulgaria, Georgia, Greece, Moldova, Romania, Russia, Serbia, Turkey and Ukraine.