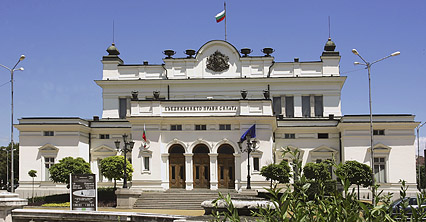 Bulgarian parliamentary delegation led by National Assembly President Tsetska Tsacheva paid an official visit to on September 26 and 27, 2011. The visit was held at the invitation of the speaker of Bavaria's parliament (Landtag) Mrs. Barbara Stamm

In her talks with the Bavarian Home Affairs Minister Joachim Herman the speaker of the National Assembly warn that a negative development of Bulgaria’s access to the Schengen area would be used inside the country for political purposes by circles skeptical to the EU. According to Joachim Herman the problem will be solved in two steps – first by alleviating the control at airports and second at land borders. He said not everything in meets the criteria and the expectations, but acknowledged that the country has made a big progress in the last years

The chair of parliament Tsetska Tsacheva and the delegation met with the speaker of ’s parliament Barbara Stamm and with the heads of parliamentary groups. They conferred with members of the parliamentary committees on European, Economic and Agriculture affairs in ’s parliament. They also had talks with the state of ’s Minister of Federal and European Affairs Emilia Muller. At the meeting, the president of the National Assembly Tsetska Tsacheva stressed that has covered without any doubt all the requirements for entry into the Schengen. She pointed out that does not accept the criteria for Schengen to be added to other evaluation mechanisms, such as the one concerning the Judiciary or Internal Order and Security.

The Bulgarian delegation insisted before their colleagues from the state of ’s parliament that should be accepted into the Schengen area and the efforts to this end activated.