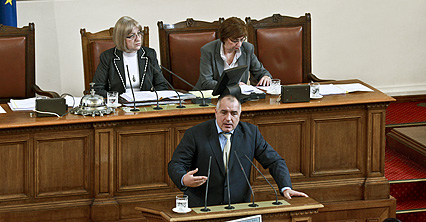 The Prime Minister of Bulgaria Boyko Borisov presented before the National Assembly his report on the development of the most important for the country issues on the EU agenda during the Polish Presidency (July – December 2011) and the Danish Presidency (January – June 2012). The presentation was attended by Bulgarian Members of the European Parliament. Boyko Borisov stated the most important priority in the first half of 2012 remains the debate on the Multi Annual Financial Framework of the European Union. He added the financial framework should be structured in such way to be able to meet the challenges of the new situation in Europe.

Reporting about the results accomplished in the second half of 2011, he pointed out that the good collaboration between the government and the National Assembly has given the country the opportunity to defend its interests in the EU and to create a good image for itself. The government, he said, is decided to deepen the discussion of the key topics for Bulgaria. As a priority, during the Danish Presidency, he defined the ongoing debates on the legislative proposals concerning the Common Agricultural Policy after 2013. Boyko Borisov noted the country will continue to defend its opinion for a stable budget, such that provides guarantees for the goals set out in the EU Treaty. He said Bulgaria will defend the policy of direct payments to ensure minimum income level for farmers. Therefore Bulgaria will insist on keeping the current levels of direct support on the part of the EU and a just distribution of the direct payments among the Members States, he added.

The report of the prime minister made clear that Bulgaria shares the idea that the Common Strategic Framework and the Cohesion Policy should encourage the smooth development of the regions through leveling off the differences and providing help to the least developed ones to reach the others. He outlined the following priorities for Bulgaria: to obtain financial support for basic infrastructure from the Common Strategic Framework, for human capital development, for small and medium size enterprises, for the development of the country’s agricultural regions. He noted that if these goals are to be reached the potential of the Bulgarian economy will be extended.

As far as the Schengen Area membership, Boyko Borisov voiced the readiness of the government to continue with its efforts on political and expert level for the access of Bulgaria and Romania, including to make efforts to help reverse  the position of the Netherlands and to work for a EU political consensus on this matter to be reached.. With regard to the European Financial Stability Pact the prime minister recalled that Bulgaria supports the measures for strict financial discipline and for the equal participation in the discussions of the countries, standing outside of the euro zone, in the drawing of the draft agreement. According to his words Bulgaria will continue to disagree with the initiatives proposing common tax regulations and taxation of financial transactions. He continued saying that during the Danish Presidency of the EU, Bulgaria will work towards budget consolidation and the attainment of the best conditions for sustainable development in the long run. Boyko Borisov made a review on the accomplished goals during the Polish Presidency, which has occurred in times of the biggest challenges experienced by Europe so far – the economic crisis. He informed the parliament that Bulgaria has actively participated in the decision making process of the EU, defending the country’s interests, while looking for acceptable for the entire EU solutions.