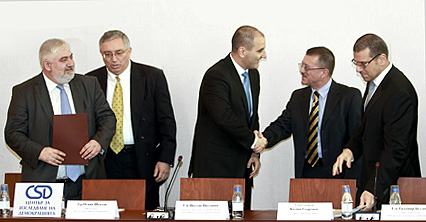 The issue of counteraction to organized crime is particularly important in Bulgaria and has been a policy priority in the recent years, noted Atanass Atanassov, Deputy President of the National Assembly and Chairperson of Internal Order and Public Security Committee when opening the discussion. The report that has been prepared to assess the threat of organized crime in Bulgaria, even though the first one of the kind, is a significant step in counteracting crime, he said. The experience thus acquired, he went on, could be used as a foundation for future even more accurate analysis.

The presented survey shows that the twelve most significant organized criminal activities generate approximately BGN 3.5 billion annual turnover, which constitutes 4,7 % of GDP of the country. This proportion shows that serious and organized crime currently generates significantly lower turnover as compared to the pre-accession period. Still, such a size of the illegal economy still poses a serious threat to the development of the country, pointed out the representatives of the Center for the Study of Democracy.

Deputy Prime Minister and Minister of Interior Tsvetan Tsvetanov and the Secretary General of the Ministry of Interior Kalin Georgiev made interventions at the forum. The European practice of counteracting the threats of organized crime were highlighted by Europol Deputy Director Michel Quille, and Alistair Woolley from Serious Organized Crime Agency (SOCA), United Kingdom, presented his country’s experience in this area.

Representatives of government institutions, of the judiciary, NGOs and of the diplomatic corps participated in the discussion.