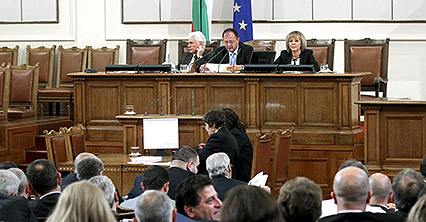 The National Assembly has adopted unanimously at first reading four draft bills for amendments of the Criminal Code foreseeing harder punishments for assaults against medical personnel. Each parliamentary group has tabled its own draft but the bills contain identical provisions. With the amendments, the law envisages the same penalty for assaults carried against medics as the one for a battery inflicted on  magistrates, public prosecutors, investigators, policemen and other office-bearers, punishable with prison sentences under the Criminal Code.

The drafts submitted by the parliamentary groups of Coalition for Bulgaria and GERB include in addition to the battery, the murder of medics, making the latter punished with the same terms of prison as the ones for murder of judges, prosecutors, investigators, police staff  and the rest of  office-bearers under special protection. The prison term for such crime is set on twenty to thirty years, life in prison or life in prison without parole. The amendments tabled by the PG of Ataka party propose teachers to be included, in addition to medics, in the group of professionals covered by the special protection.

The new Minister of Health, Tanya Andreeva, urged the police and the judiciary in the country to implement the law amendments stressing that people needed justice.

In the same session the parliament has adopted two draft bills raising the amount of the monthly maternity benefits until the child reaches 2 years of age from BGN 210 to BGN 310.  The GERB’s bill proposes the law to take effect on 1 July 2013, while the one of Coalition for Bulgaria proposes the date October 1, 2013.