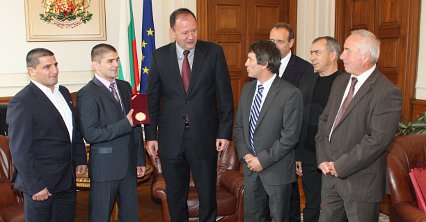 “I am glad to receive at the National Assembly representatives of the most successful in Bulgaria Olympic sport”, said Mihail Mikov to the guests. He expressed hope that wrestling will continue to reap great success and glory for Bulgaria throughout the world in the future.
The President of the Bulgarian Wrestling Federation Valentin Yordanov presented Ivo Angelov as very hardworking and dedicated competitor.  Unfortunately luck is not always on his side and this is why he was not able to win the title at the Olympic games in London, but we all hope he will achieve that at the games in Brazil. Valentin Yordanov informed Mihail Mikov that Bulgarian wrestlers in the classical and free style have good chances to win the Olympic title for Bulgaria in 2016.
The leadership of the Bulgarian Wrestling Federation expressed gratitude towards the lawmakers for their understanding and support, in particular for the Declaration passed by the National Assembly on September 2013 on occasion of the proposal made by the Executive Bureau of the Summer Olympic Games to drop out of the games the wrestling. With the Declaration the representatives of the 42nd National Assembly had joined unanimously to the calls of the world sports community to preserve the place of the wrestling in the program of the Olympic Games.

The president of the National Assembly took interest in the difficulties existing before the development of the wrestling and promised to look for legislative solutions to some of it.

Valentin Yordanov noted that the Federation, one of the largest in Bulgaria, faces many problems such as the funding of the clubs, the state of the sports facilities and the lack of sports training in the schools. He stressed the need to particularly pay attention to the children’s and youths sports, as this is the age when talented young wrestlers could come across. He proposed the reinstatement of student games as a useful measure in this direction.

The chair of the Children’s, Youth and Sports Committee, Hristo Monov, who was present at the meeting, declared the committee is working already on specific legislative proposals to solve the problems relating to this particular sport and to the development of all sports.
At the meeting present were the Deputy Chairman of the parliamentary committee Georgi  Angelov and leaders of the Bulgarian Wrestling Federation as well as the training staff of Ivo Angelov.