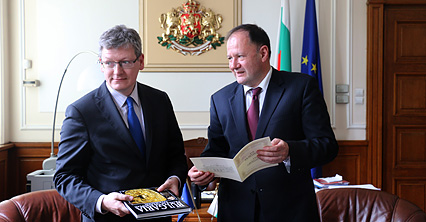 The president of the National Assembly Mihail Mikov and the EU commissioner for employment, social affairs and inclusion Laszlo Andor have discussed the challenges faced by the European Union, its labor market, employment and social policy.  They met before the public discussion, held in the National Assembly, on matters concerning the youth unemployment, which was organized by the parliamentary committees on labor and social policy and on European affairs and European funds oversight.

Commissioner Andor expressed satisfaction of being again in Bulgaria, to discuss current problems of Bulgaria in the context of the EU agenda. In his view the youth employment is among the basic obligations and responsibilities of the politicians.

The head of the National Assembly informed the guest about the most important decisions adopted by the 42nd National Assembly in the social sphere since the beginning of its mandate and pointed out on several of them aimed at improving the life of people, taken under conditions of economic crisis.

Mihail Mikov shared the opinion of commissioner Andor that the problem with youth unemployment is extremely severe and defined the decisions adopted by the National Assembly in this respect as the most important in the social sphere. He pointed to the 100 million euros allocated to tackle the problem and to encourage employers to hire people younger than 29 years.

Mihail Mikov expressed his concern over the surge in some European countries of attitudes leading to the abuse of basic rights, including the rights of Bulgarian citizens.