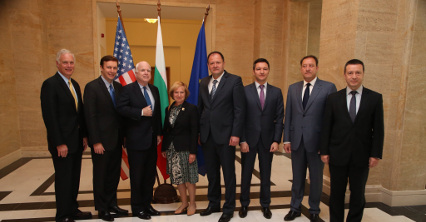 The President of the National Assembly has held on June 8th 2014 work lunch with the delegation of the Senate of the United States of America. The delegation is on a visit to Bulgaria and is led by US senator John McCain. On the side of Bulgaria the lunch was attended by the parliamentary foreign affairs committee chairman Yanaki Stoilov, by foreign minister Kristian Vigenin and by defense minister Angel Naydenov. The US Senate delegation included also senators Christopher Scott Murphy and Ronald Jonson. The American delegation was accompanied by Her Excellency Marci Reis, Ambassador Extraordinary and Plenipotentiary of the United States of America to the Republic of Bulgaria.

The parties exchanged opinions on matters concerning the bilateral cooperation, the situation after the events in Ukraine, the energy security and the interaction in the frameworks of NATO.

The Bulgarian side has presented the position of the Republic of Bulgaria on the entire set of issues of interest to the American delegation. The parties agreed that the solution of any problem in international and internal plan should be solved by way of dialogue, solidarity, by following the common democratic values and by the strict rule of the law. The delegation was informed about the goals and the plans of the Bulgarian legislative body and the government for socioeconomic reconstruction of the country and stabilization of its economic potential.

The US Senate delegation praised highly the contribution of the Republic of Bulgaria to the peacekeeping missions of NATO. The delegation underscored that the USA look with understanding at the economic difficulties of Bulgaria and at its search of ways and prospects for higher energy independence and expressed will to assist in finding out common solutions.