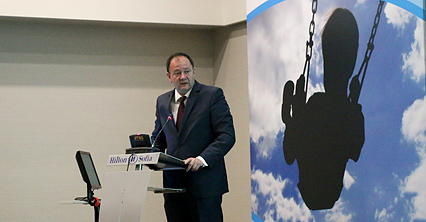 A better integration of social and state efforts and interaction between the institutions in charge of handling the problems of juvenile  justice is needed, stated the president of the National Assembly at the opening of the National Conference: “Children in conflict with the law – reform in the system of justice for children in accordance with international standards and children’s best interest”. The two-day long forum is organized by the National Assembly and UNICEF Bulgaria with the support of the Embassy of France and the Bulgarian-Swiss Cooperation Program.

The socio-economic development of the last 25 years has outlined the differences in the access to justice of children from different social and ethnic groups, noted Mihail Mikov. He added the challenge before the legislator is to guarantee the access to justice while preserving the dignity and the rights of children. The chair of parliament has thanked UNICEF for undertaking this initiative, allowing the opportunity to look at the existing practices and state of the system and to outline the important and necessary solutions in the field – legislative, on the part of the executive authorities and the non-government sector. Mihail Mikov expressed confidence that solutions are to be found.

The UNICEF representative in Bulgaria, Tanja Radocaj, noticed that the reform in the system of children’s justice, postponed for a long time, had a direct influence on the fate of thousands of children and must be accelerated. The reform must focus on the children, because they deserve  a second chance. Behind every child fallen in conflict with the law there is a long list of adults who had failed in their responsibilities, we are in debt to these children, she added.

In the forum, held under the patronage of the President of the National Assembly Mihail Mikov and the Vice-Premier Zinaida Zlatanova, took part the Deputy Minister of Labour and Social Policy Lazar Lazarov, Bulgaria’s Ombudsman Konstantin Penchev, representatives of the Judiciary, of the European Commission, Bulgarian and international experts.

By presenting the good practices of Bulgaria, the Netherlands and Great Britain the Conference on “Children in conflict with the law – reform in the system of justice for children in accordance with international standards and the children’s best interest” has supported the cooperation on the highest political and expert level between  representatives of the executive,  legislative and judicial branches of government in favor of the implementation and acceleration of the reform in the system of juvenile justice in Bulgaria in accordance with  its obligations as Member State of the European Union and as signatory to the UN Convention on Rights of the Child.