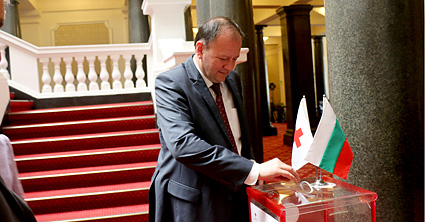 The National Assembly and the Bulgarian Red Cross have held fundraising campaign titled: “Let us help together those who suffered from the floods!” Collection boxes were placed in the building of the NA. The parliament’s Speaker Mihail Mikov, the NA Vice-President Maya Manolova and the Chairman of the Bulgarian Red Cross Hristo Grigorov were among the first to donate.

The BRC has activated a short SMS number 1466 for the donations. All willing to contribute could do it via the above SMS number, through the special bank accounts, or online.

The chair of the 42nd National Assembly Mihail Mikov stressed that the charity drive is one more sign towards all Bulgarian citizens. In his words the activities of the Bulgarian Red Cross had been extremely important. He added there were enough regulations clearly defining the tasks and the responsibilities of the competent institutions in charge of managing crisis situations, such as the floods in Varna, Dobrich and Veliko Tarnovo.

The head of the BRC Hristo Grigorov called all lawmakers to help. He added the coordination locally was very good. The local teams, managing the crisis response, work around the clock and despite the strong stress at the beginning of the disaster the state mechanisms, the BRC and the non-government sector were set in operation.