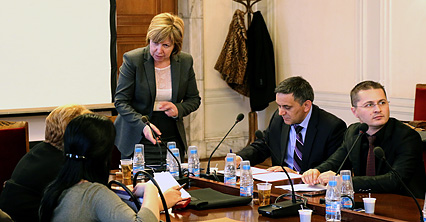 This statement was made by the executive director of Irrigation Systems EAD Dimitar Metodiev. The parliamentary Committee on Agriculture and Foods heard the company’s report on the implementation and the management of the basic requirements of the consolidation program for the company, envisaged in the Waters Act.

The information points out that the company needs urgently BGN 19 774 704 to guarantee its efficiency and improve its financial standing.

The high waters of the last months passing through most parts of the country were managed successfully; however the long standing of high waters at some locations had damaged or threatened the safety of the installations. The lack of funds makes impossible their timely repair and other equipment may break down as well, the information says.

Some of the installations were built 70-80 years ago thus breaking down and becoming obsolete. Many regional governors and mayors ask urgent help for the reconstruction of destroyed parts of levees or for reinstatement of water passages, or for river corrections, so that the hydro-technical equipment could function properly but due to lack of funds Irrigation Systems EAD can’t respond.

Irrigation Systems EAD is in charge of the drainage of arable lands, of many towns and villages and infrastructure. The report warns that the flooding at the Asparuhovo district of the city of Varna could become a pale copy of what could happen if a heavy break down of basic installations of the company was to occur. Just the volume of waters in the dams, managed by the company, amounts to 3 170 148 000 cubic meters.

Irrigation Systems EAD has received through the budget of the Ministry of Agriculture and Foods 15 M levs for 2014, which have been spent already for the most pressing needs of the company. Its debts   amount to 16, 8 million levs as of June 19th, 2014.