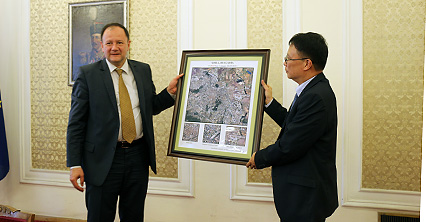 Possibilities for scientific cooperation and joint participation in European programs were among the topics discussed. The head of parliament noted that scientists from Vietnam could take part in European projects through the Bulgarian Academy of Sciences. He stressed the visit of the delegation was part of the strategic partnership between Bulgaria and Vietnam developed in the last years. He praised highly the relations between the parliaments of the two countries and recalled the recent visit of representatives of Vietnam’s Labor and Social Policy Commission in Bulgaria with the task to get acquainted with the experience of Bulgaria in the field of social and labor legislation. The economy of Vietnam is developing very fast and the scientific potential of Bulgaria in a number of fields – from nuclear energy to agriculture, could be of benefit to our Vietnamese friends, emphasized Mihail Mikov.

The President of the Science and Technology Academy of Vietnam, Prof. Dr Chau Van Minh noted that the academy was interested in the scientific exchange with Bulgarian colleagues and the training of specialists. He pointed out the BAS, which had invited the delegation, and the Academy of Sciences and Technology of Vietnam are to have another meeting this year to discuss the specific fields and areas of cooperation. He specified the AST of Vietnam was interested in the transfer of technologies, particularly in the pharmaceutics field.

The chair of parliament Mihail Mikov explained that Bulgaria had a well-developed pharmaceutical industry, the products of which meet world standards, are competitive and at good prices.