National Assembly
of the Republic of Bulgaria
News
Challenges faced by the European Union and expectations after the elections for European Parliament key topics of the Conference titled: “Europe at a crossroad” 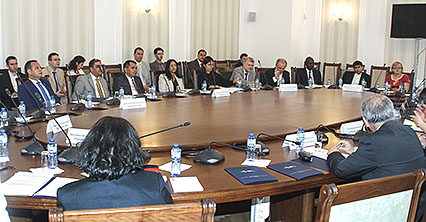 The ambassador of Italy, H.E. Marko Kontichelli, was the key lecturer in the panel entitled “Rethinking the role of the European Union”. Italy has taken over the Presidency of the European Union as of 1 July, 2014. H.E. Marko Kontichelli has presented the priorities during the Italian presidency and stressed the latter has started in a complicated and ambiguous international situation. During this presidency special consideration will be given to the unemployment, to the fight against poverty, the risks to energy security and to tackling the immigration pressure. The enlargement of the European Union remains of crucial importance, the aspiring countries and the potential candidates should be motivated and the Italian presidency will insist on further steps in the process of enlargement, the ambassador added.

The chair of the National Assembly’s Foreign Policy Committee Yanaki Stoilov noted before the participants in the forum that today Europe faces not a single crossroad. In his words the world financial and economic crisis has led to the greatest economic recession and social restrictions in the history of the European Union and to a big wave of euroscepticism. The crisis has put under question part of the principles on which the EU is based, the way its institutions operate and the essence of its policies. It is necessary to undertake a discussion on these issues because if the answers are absent there is no way to restore and boost the confidence of the citizens in the Union and its primal role in the emerging multipolar world, said Yanaki Stoilov.

He underscored that without the partnership with Russia and Turkey in the fields of economy, energy and defense we could hardly imagine the EU as an essential player in global politics. He noted that the partnership with the USA is traditional for the European Union, but its enlargement should not mean uncritical adoption of the Transatlantic Trade and Investment Partnership between the EU and USA.

According to the chair of the National Assembly’s Foreign Policy Committee the most important way of handling the unemployment and for restoring the economic strength of the EU was the reindustrialization of Europe. It is necessary to restore the conventional for the continent production industries and to go on with the technological development, something requiring refocusing from the competition within the EU to increasing the competitive strength of the EU as a whole over the countries and regions beyond it. For Bulgaria this problem is even stronger, she needs to catch up in its economic development, decrease tangibly the poverty levels and to get faster closer to the average developed EU countries, Stoilov stressed.

Plamen Angelov, deputy foreign minister, talked about the role of Bulgaria as an external border of the EU and about the current challenges the country faces in this respect. Speaking on the conference theme “Black Sea Region and EU Policy” the ambassador of Romania Anton Pakuretcu drew attention on the present aspects in the security field, while the director of the Economics and International Relations Institute Lyubomir Kyuchukov outlined the priorities of Bulgaria in the Black Sea region.