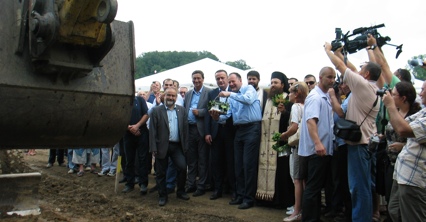 The president of the National Assembly Mihail Mikov has launched the construction of the road that will lead to the future border crossing between the Republic of Bulgaria and the Republic of Serbia at Salash – Novo Korito. The groundbreaking ceremony took place in the area of Kadu Boaz during the traditional fair, when the border opens for 3 days allowing the free passage of Serbs and Bulgarians. The ceremony was attended also by  MP Filip Popov, by regional minister Desislava Terzieva, the minister of energy and economy of Serbia Alexander Antich, the regional governor of Vidin Krastyu Spasov, other officials and thousands of Bulgarians and Serbs.

Mihail Mikov and Desislava Terzieva spilled symbolically water for the smooth construction works of the road and the border checkpoint.

“Today we have opened the construction of a new road and border checkpoint. It is important to notice that this project realizes the dream of the many Serbs and Bulgarians present here - to be able to communicate, to be together in Europe. I would like to thank both governments - of Bulgaria and of Serbia for the fact that we have reached this point and are to continue forward, Mihail Mikov said.

He traced some facts of the project – first the selection of the future border checkpoint at the locality of Salash and Novo Selo in 2007, than the signing of the agreement between the two governments in 2009, and now the start of the construction works, the abolition of the visa regime, all things that will link people across the border.

The project foresees rehabilitation and new construction of more than 5 kilometers, completely funded by the state budget, under the programme for investments known as: “Growth and sustainable development of the regions”. The funding amounts to around 4 million levs.