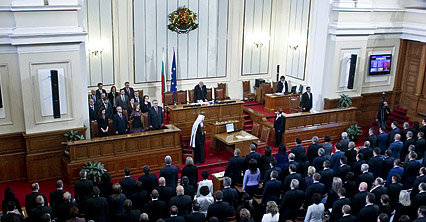 The oldest Member of Parliament, Stefan Danailov, has opened the first sitting of the newly elected 43rd National Assembly. The national representatives took the following oath of office: “In the name of the Republic of Bulgaria I swear to observe the Constitution and the laws of the country and in all my actions to be led by the interest of the people. I swear.”

Stefan Danailov noted that being the oldest member of the parliament he bearded the right and the responsibility to turn to the deputies with the hope that this time he would be a better fortune-teller about the future of their common work. The bouquet of political parties, which have sent representatives in this hall, is motley. In order to convince our voters we have sent them plenty of various messages, pointing to different directions. Nevertheless I hope that the wisdom of our people will help us mobilize and unite our thoughts in the name of reviving its well-deserved self-confidence”, he declared.

The difficult labors of the current parliament prove that we have neglected many of the principles of the so much desired democracy and that we could not postpone further the treatment of Bulgaria’s public life, Stefan Danailov said. We are obliged to look honestly to the truth and urgently offer the most important steps on the path of the national salvation and step by step to try to reinstate the trust of the people, to activate their participation in the social undertakings, he added. According to his words there were still many people waiting for the promised change - young people looking for grounds to perfect themselves and to remain in the Republic of Bulgaria; senior citizens – for a just reward for their work; business people waiting for guarantees for their creativity and economic activity; artists and scientists – for space for their creative inspiration. If we still keep in our hearts a droplet of blood preserving the behest of the Kubrat saying that unity makes the strength we must unite our minds and efforts, for there is nothing more important than the wellbeing of our nation and it is only by joining our efforts that we could provide the fruits of its future, continued Stefan Danailov.

The anthems of the Republic of Bulgaria and the European Union have sounded in the plenary hall.

The Head of State, President Rosen Plevneliev has addressed the national representatives. He said Bulgaria had no need of messiahs to decide one handedly  what was right and what was not; there  is no a magic formula, such that could lead us to the path of prosperity without our concerted efforts, he added. The solution remains in the work for the benefit of people and in the principles of the rule of law and the division of powers, he underscored.

In order to reestablish the trust in the institutions, the parties and the parliament, we need to fulfil publicly and responsibly what we had promised. With their vote the people have said their firm word; it is now up to the politicians, the head of state noticed. Whether we like the results or not is not important, we are obliged to read out  the results correctly and to find out the solutions. He added people want a working state, such that guarantees justice, social protection and everyone’s abiding by the rules. The pre-election fights are over, we face the reality, the difficult but important decisions to make, the President declared. He expressed hope that the National Assembly would transform into an institution where the political forces debate ideas and arguments, while personal and party confrontations will remain backward.

Representatives of the parties and coalitions elected in the parliament have made statements at the formal sitting.

Guests at the formal sitting were former speakers of the parliament Alexander Yordanov, Yordan Sokolov, Ognyan Gerdjikov, Georgi Pirinski, the Vice- President of Bulgaria, Margarita Popova, the Caretaker Government Premier  Georgi Bliznashki , cabinet members, His Holiness the Patriarch of Bulgaria, Neofit, the Head Mufti Mustafa Hadji, Members of the European Parliament , diplomats. The inaguration of the 43rd parliament was broadcast live at the National Television and the National Radio.