National Assembly
of the Republic of Bulgaria
News
Lawmakers and civic organizations to propose new provisions and amendments to the Rules of Organization and Procedure of the National Assembly until 6 pm, November 5th 2014 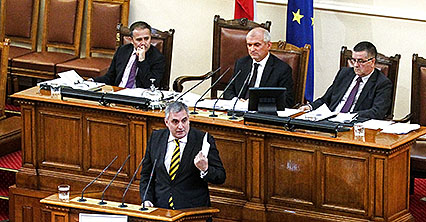 Members of Parliament and civic organizations are called to table proposals and amendments to the Rules of Organization and Procedure of the 43rd National Assembly until the deadline, set at 6 pm, November 5th 2014. The decision was made on the proposal of the Interim Parliamentary Committee in charge of drafting the new rules. The Rules of the 42nd National Assembly will serve as basis for the new ones. The draft rules will be published on the website of the interim committee.

MPs are to further consider the Interim Budget and Finance Committee’s conclusions on the Bulgarian National Bank report regarding the situation and the actions taken with respect to the Corporate Commercial Bank AD and Victoria Bank EAD.