National Assembly
of the Republic of Bulgaria
News
Montenegro’s Premier Milo Jukanovich at a meeting with National Assembly President Tsetska Tsacheva: It is very important for us that friends like Bulgaria are supporting us 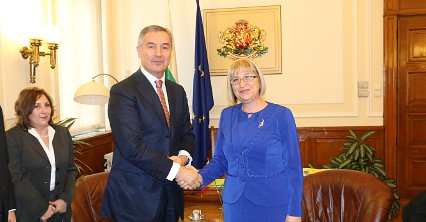 National Assembly President Tsetska Tsacheva met with the Premier of Montenegro Milo Jukanovich, who is on official visit to Bulgaria at the invitation of Prime Minister Boyko Borisov.

During the talks both parties expressed satisfaction with the dynamics of the political relations and the active dialogue in the field of European and Euro Atlantic integration and the regional cooperation.

National Assembly President Tsetska Tsacheva noted that the two countries’ peoples were very close, with common interests, and the achieved up to now represented a stable base for the future development of the bilateral relations. We think that during the present year we should encourage the parliamentary cooperation between us, Tsetska Tsacheva noted and added that Bulgaria had valuable parliamentary experience in the processes of European and NATO integration which it was willing to share with Montenegro.

The Montenegrin Prime Minister Milo Jukanovich has stated that Bulgaria was among the strongest supporters of the Montenegro’s access to the European and NATO structures. He added Montenegro considers the support of his country on the part of friends like Bulgaria as very important.  He further said that Montenegro was working on covering the conditions, has opened 16 chapters of the negotiation process and was expecting invitation for membership. He noted that it was very important for Montenegro to be accepted as a member of NATO until the end of 2015.

The parties shared the understanding that the economic partnership in all spheres of interest should be enhanced, particularly in the fields of culture, tourism, energy, infrastructure and agriculture.

The Chair of the National Assembly Tsetska Tsacheva stressed that Bulgaria pays great attention to the parliamentary dimension of the Process for Cooperation in Southeast Europe (PCSEE) as an important factor for stability in the region. In her opinion the most efficient and economically sound solution for the Secretariat of the Parliamentary Assembly was to fully tap on the experience and the resources accumulated by the Regional Secretariat of the organization in Sofia.

The Chairs of the Energy and of the Culture and Media Committees Delian Dobrev and Polina Karastoyanova took part in the meeting.