National Assembly
of the Republic of Bulgaria
News
Tsetska Tsacheva: The democratic streak of the Bulgarian people finds its brightest confirmation at Oborishte 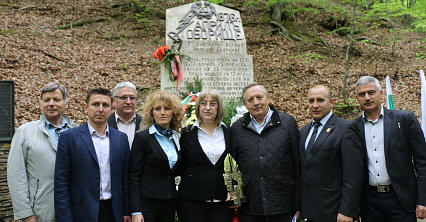 It’s only here, plunged in the atmosphere of Oborishte, that we could reflect on the roads and threads taking their beginning in this place and leading to the Free, Independent and Developed Bulgaria we live in today. This is through because the decisions taken at Oborishte by the people’s representatives, 139 years ago, had determined our entire development thereafter. These words are part of the speech of the National Assembly president Tsetska Tsacheva, delivered at the commemoration of the anniversary of the April Uprising, held at Oborishte.

The most important among those decisions was that everyone should participate in the decision making as far as common matters are concerned. In the words of Tsetska Tsacheva this democratic streak of Bulgarians, which had taken different forms – from local self-government to the activities of the local cultural and educational centers called “chitalishte”, had found at Oborishte, before the liberation, its brightest expression. In her words this fiber in the national character is not only still alive today but is the engine for our development. She recalled the fact that at Oborishte the people’s representatives made together the decision to undertake the armed fight for liberation and to punish everyone who would exercise violence upon women, children and elders and a peaceful population, irrespective of their religious or ethnic affiliation. In a certain sense the Bulgarians at Oborishte proclaim the European ideas of humanism and tolerance even before becoming themselves Europeans. As a matter of fact at Oborishte they altogether took the decision that Bulgaria would become a civilized and tolerant European state, which would not persecute its citizens because of their religion or ethnic affiliation.

It is at Oborishte thus where our freedom, independence and statehood were started, marked by the spirit of tolerance and democratic values, stated Tsetska Tsacheva. She has added that today Bulgaria was member of the European Union and despite the vicissitudes in their development the Bulgarians had made the efforts to build a state of free, knowledgeable and capable people.

At the Monument of Oborishte, the speaker of parliament took part in the solemn prayer and water blessing ceremony. Present also were members of the National Assembly, public figures and many citizens.  At the Oborishte Monument were served flowers. As usual the award under the name of “Oborishte” was handed out. The award has been established by the Association of the Revival Towns and Municipalities called: “Renaissance for 21st Century”. In 2014 the award was handed out to the president of the Bulgarian Academy of Sciences, Acad. Stefan Vodenicharov. The award is presented each year for contributions to the preservation and the affirmation of the spiritual values of Bulgaria.