National Assembly
of the Republic of Bulgaria
News
Setting up common European policy with regards to migration and refugees – key point discussed at the meeting of the National Assembly President Tsetska Tsacheva with the Speaker of the German Bundestag, Dr. Norbert Lammert 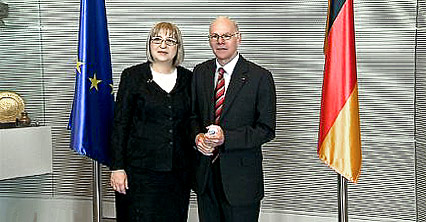 The drawing up of a common European policy with regards to migration and refugees, not available currently, was the key issue discussed at the meeting between the President of the National Assembly Tsetska Tsacheva and the Speaker of the German Bundestag, Dr. Norbert Lammert. A Bulgarian parliamentary delegation is on a visit to Berlin, on May 6th and 7th, 2015.

Tsetska Tsacheva has informed Prof. Lammert on the efforts made by Bulgaria with respect to the unprecedented refugee influx. She has stated that the problem required solidarity on the part of Europe, as well as paying the same importance on the land borders as to the maritime. In her words it was not within the capabilities of a single member- country like Bulgaria, which geographically stands at the path of the migration wave, to handle the problems by itself.

Norbert Lammert stated that a common European policy should be set up to tackle the problems of migration and refugees. He agreed that at present the load of refugees is not evenly distributed among the European states.

Dr. Lammert said he believed the security of Europe would be better guaranteed if Bulgaria and Romania were accepted to the Schengen area as soon as possible. Tsetska Tsacheva added that Bulgaria has met all technical requirements, was using the Schengen information system and acted as a member of Schengen.

She informed the German lawmakers on the efforts taken by Bulgaria with regards to the fight against crime and the reforms in the judicial system.” We have a clear political will and knowledge of what the expectations of our partners are and we are actively working to meet our commitments as an EU member country”, Tsetska Tsacheva underscored.

The chairman of the Internal Affairs Committee of the German Bundestag, Mr. Wolfgang Bosbach, noted, during the talks with the delegation, that his country was also facing the big challenge connected with the wave of migrants. He said Germany and Sweden were the countries accepting the greatest number of refugees. In 2008 their number had been 28 000, while this year it was 300 000 with the prospect to reach 400 000.

The president of the Bulgarian parliament has met in the Bundestag with the chairman of the European Affairs Committee, Mr. Gunther Krichbaum.

The bilateral relations between Bulgaria and Germany were given high marks . Both parties confirmed the strategic importance of their relations.

On May 7th, 2015, the lawmakers of Bulgaria will attend the opening of the Federal Province of Berlin’s parliament plenary sitting. They will confer with the head of the Friendship group Germany-Bulgaria Gernot Erler.

The parliamentary delegation of the National Assembly includes the deputy chairs, Ivan Ivanov and Krasimir Karakachanov, and the chairman of the friendship group Bulgaria-Germany Atanas Merdzhanov.