National Assembly
of the Republic of Bulgaria
News
Tsetska Tsacheva: Europe is a space of freedom and democratic values providing each one of us with opportunities for development 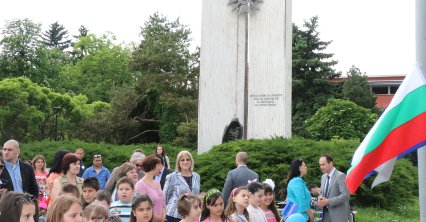 “Europe is a space of freedom and democratic values providing each one of us with opportunities for development”, stated the president of the 43rd National Assemblyl, Tsetska Tsacheva, on the Day of Europe’s celebration in the town of Pleven. In her words, being part of Europe, Bulgaria is on the not easy but correct way. Forthcoming are difficult reforms in the judiciary, she noted, and added that the fight against corruption and organized crime was basic priority in the work of the state institutions.

She underscored the ever growing role of United Europe in Bulgaria, not only from historical and political point of view, but with respect to the changing system of values as well.

The European Parliament’s Member from Bulgaria, Andrey Kovachev, expressed his joy and pride of the fact that Bulgaria was part of the family of democratic European peoples.  He called on young people to remain and find their happiness in the Motherland and to take active part in the economic development of the country.” Let young people live in freedom and happiness with their families and friends and get acquainted with our European continent”, he said further.

The head of the National Assembly, Tsetska Tsacheva, NA members and the Member of the European Parliament, Andrey Kovachev, were official guests at a children’s tennis fest on the occasion of the Day of Europe. Later they took part in a round table under the title: The European People’s Party - values and policies.