National Assembly
of the Republic of Bulgaria
News
Tsetska Tsacheva at the Conference in Lisbon: Increased influx of refugees towards the EU countries requires effective implementation of the solidarity principle 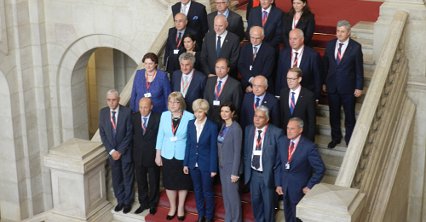 At the proposal of Bulgaria’s National Assembly President, Tsteska Tsacheva, the above text was included in the Final Declaration of the Second Summit of the Heads of Parliaments of the Union for the Mediterranean. In the forum, held on May 11th 2015 in Lisbon, Portugal took part 23 parliament speakers.

Tsetska Tsacheva has noted before the participants that Europe should introduce adequate measures and instruments for tackling the mass migration flows. In her words the states facing big migration pressures across their land or water borders should be granted special support by the rest of the EU countries.

The topics discussed at the Conference were setting up a common European policy (rules) for lawful immigration and for establishing legal channels. The heads of parliaments from the Union for the Mediterranean debated the introduction of simplified rules and procedures for the reunion of families, improved flexibility for granting working visas, for providing better information to the society and for the possibilities for fellowships to migrants – students, researchers and teachers.

The XIth Plenary Session of the Parliamentary Assembly of the Union for the Mediterranean is held on 11 and 12 May 2015 in Lisbon. The Session will be attended by the leader of the Bulgarian Delegation to the Assembly, Stanislav Atanasov, and by Svetlana Angelova and Atanas Merdzhanov, members of the Delegation.

The Parliament of Portugal took over the chairmanship of the Union for the Mediterranean on 9 February 2015. The focus of the Portuguese Chairmanship will be on the migration policy.