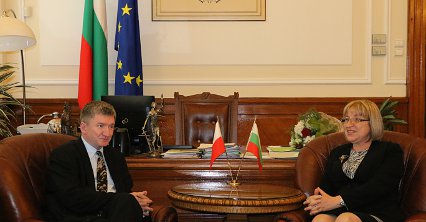 The National Assembly President Tsetska Tsacheva and the Vice-President Yanaki Stoilov met with the Deputy Speaker of the Republic of Poland’s Sejm Jerzy Wenderlich. Among the issues discussed during the talks were the opportunities for bilateral partnership and development of the parliamentary relations between Bulgaria and Poland in the fields of social policy, economic development and healthcare. The delegation of the Republic of Poland’s Sejm (lower chamber of parliament), led by the Deputy Speaker Mr Jerzy Wenderlich is on a 2-day official visit to Bulgaria.

The President of the National Assembly Tsetska Tsacheva talked about the need to be more rational and wise as regards the current problems and challenges faced not only by Bulgaria and Poland but also by the European Union. She noted that the accession of Bulgaria to the Schengen area was among the basic priorities of the state institutions in Bulgaria. The country can’t cope with the migration crisis alone and for this reason we need the solidarity of our European partners, Tstetska Tsacheva noted.

The Vice President of the National Assembly, Yanaki Stoilov, stressed that the membership of Bulgaria to Schengen was of great importance from economic and social standpoint. He further said the EU needs to become more competitive on the global scene and to get more trust among its citizens. He added politicians should not forget social issues, which in Bulgaria are more perceivable.

The Deputy Speaker of the Polish Sejm, Jerzy Wenderlich, expressed his satisfaction with the development of Bulgaria as a full-fledged member of the EU. He added both Poland and Bulgaria had similar goals and tasks, the pursuit of which should follow one and the same path. Jerzy Wenderlich concluded that the old EU member countries need to help the new ones as they look at the old members with great expectations.

The delegation of the Polish Sejm is scheduled to meet with the Foreign Policy Committee Chair, Dzhema Grozdanova, and with the Chairman of the Committee on European Affairs and Oversight of European Funds, Svetlin Tanchev.