National Assembly
of the Republic of Bulgaria
News
Tsetska Tsacheva at the Tenth Meeting of Women Speakers of Parliament in New York: Bulgaria demonstrates a tangible progress in its gender equality policies 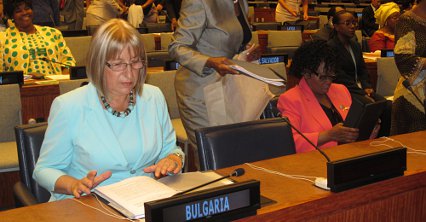 The Tenth Meeting of Women Speakers of Parliament was open at the United Nations headquarters in New York. Bulgaria is represented by Bulgaria’s Speaker of parliament Tsetska Tsacheva. The event is attended by 32 of the 46 women, heads of parliament, in the world – the highest number the event has attracted so far.  The basic goal of the forum, organized by the Inter-Parliamentary Union (IPU), is to explore possible innovations for accelerating the process of reaching gender equality. The focal point of the discussions are the balance of gender representation in the parliaments, domestic violence against women and the securing of enough funds in order to reach advancement in the equality of genders. At the event held account of the achievements reached in the last decade. The conclusion is that despite the successes and the growing awareness that gender equality is crucial for the process of democracy and development; only 15% of the parliamentary speakers in the world are women. Statistical data from the start of 2015 shows that women represent only 17% of government members and 22% of lawmakers in the world. The participants in the forum concluded that the access of women to leadership and managerial positions in the private and public sector is still a challenge for all states. Research data presented at the meeting shows that state and local authorities are more efficient when more women hold leadership positions. Research data also proves that companies which have more women executives and in their managerial bodies have higher results, in comparison with their counterparts.

The women, speakers of parliament, reached the conclusion that in order to abolish the invisible barriers before gender equality societies need innovative approaches, adequate legal framework, as well as changes in the standards and attitudes within the institutions and the family.

The Speaker of Bulgaria’s parliament noted in her speech that gender equality is a measurement of democracy and should be constant item on the agenda of every institution. She outlined the problems and difficulties from the prism of the European experience – namely the abolishment of payment differences between men and women, the quality of job positions – considering the fact that women still represent the greater part of the work force in low paid jobs. She stressed the fact that the crisis of the European economies has led to the appearance of two particularly vulnerable groups of women: seniors and lonely mothers.

Tsetska Tsacheva said governments should not only confirm their commitment to reach gender equality but to agree that this aim needs renewed energy and innovative policies. She presented the experience and progress of Bulgaria in this respect. The Chair of the National Assembly noted the drawing of the bill on gender equality and the recently adopted proposal of the Social Ministry regarding the working women. The bill provides flexible work schedules and is among the newest and most positive steps. These law amendments will help and facilitate working women to pay more time to their families, education and professional development, she concluded. Tstetska Tsacheva added that at present the government of Bulgaria has proposed rules for integrated health and social services to be offered in the homes of dependent household members thus helping women taking care of them.

Other topics on the agenda of the UN Tenth Meeting of Women Speakers of Parliament were the ways of ending domestic violence against women and the abolition of harmful practices in time of conflict and post conflict situations, the inclusion of women in the processes of peace reinforcement. The forum has heard the special address of Ms. Jodi Williams – Nobel Peace Laureate. Ms. Jodi Williams has the greatest contribution for the world ban of landmines. She noticed that women are bearers of change; that leadership is a matter of personal inspiration, serving as example to others.