National Assembly
of the Republic of Bulgaria
News
Delegations of the parliamentary Foreign Affairs Committees of Bulgaria, Romania and Serbia discuss at a meeting in Sofia opportunities for economic development and energy projects’ realization 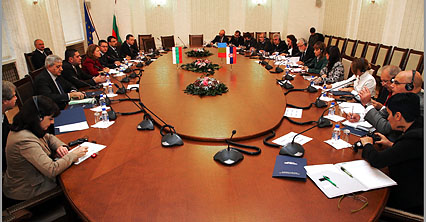 Delegations of the parliamentary Foreign Affairs committees of Bulgaria, Romania and Serbia have met in Sofia to discuss opportunities for economic development and realization of energy projects.

“We have to work together to increase the effectiveness and prestige of our state institutions and national parliaments”, noted the 43rd National Assembly’s Foreign Affairs committee chairperson Dzhema Grozdanova. In her words the realization of the strategic for Bulgaria, Romania and Serbia energy projects will lead to diversification of the energy resources and the supply, and their security.

During the talks, the head of the Foreign Affairs Committee of the Republic of Serbia’s National Assembly, Alexandra Dzhurovich, stressed that with a population of around 35 million the three countries play a substantial role in the economic stability of the region, as well as on the European market. “Together we can solve such important for our citizens political issues as are the investments in the transport, tourism and the construction of electric and gas energy interconnectors”, she added. The Serbian MPs have thanked Bulgaria and Romania for their support for Serbia’s EU integration and full membership.

The participants defined the infrastructure projects like the Pan- European Transport corridor X and the construction of the highway between Bucharest – Sofia – Belgrade to be of first priority.

The chairperson of the Foreign Affairs Committee of the Senate of Romania, Petru Philip, has pointed to the great potential that Danube River could play in the economy and politics of the region. According to him all these factors present wonderful opportunities for development that could transform the Western Balkans and the Black Sea region in an extremely important geopolitical area.