National Assembly
of the Republic of Bulgaria
News
The legislator has placed an important focus on the problems related to child care and protection of children’s rights, said Tsetska Tsacheva at the round table “The Ombudsman’s Role in Protecting Children’s Rights” 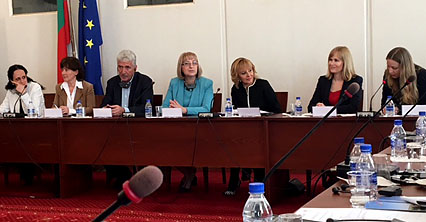 In Bulgaria the legislator has attached an important focus on the problems related to child care and protection of children’s rights, but some of the statutory acts regulating various policies in this field do not comply with contemporary social relations, said the Chairperson of the National Assembly Tsetska Tsacheva, who opened a round table entitled: “The Ombudsman’s Role in Protecting Children’s Rights”. The forum was organized by the Ombudsman of the Republic of Bulgaria Maya Manolova in collaboration with UNICEF.

The Chairperson of the National Assembly expressed content that topics related to child protection and the role of the family have been discussed at different forums at the National Assembly in the last few weeks. She pointed out that this is indicative of the importance the Bulgarian legislator attaches to those issues. Over 20 statutory acts regulate different horizontal policies in the field of healthcare, social activities, youth and sports, child  justice, but some of these acts no longer comply with contemporary social relations, said Tsetska Tsacheva.

While we have gained experience which should be shared, we need to openly acknowledge the problems we still face and whose legislative solution we are seeking, said the Chairperson of the National Assembly. According to Tsetska Tsacheva, the draft “Vision for Family Policy in Support of Children and Families in Bulgaria”, developed by NGOs,  provides a good basis for the search of such solutions. I am convinced that new ideas will be presented at today’s round table, we should draw on the experience of Norway so as to achieve more concrete results, added the Chairperson of the National Assembly.

Bulgarian children have the right to happy childhood, calm and safe environment. We have the commitment to ensure these opportunities, the Ombudsman of the Republic of Bulgaria Maya Manolova stated to the participants in the forum. She pointed out that unlike Norway, our country does not have a specialized ombudsman for children and we have a lot more to learn in terms of protecting children’s rights and exercising independent monitoring on how institutions deliver on their commitments.

During the round table, the ombudsman for children of the Kingdom of Norway Anne Lindboe presented information about the role, functions and responsibilities of this institution. She stated that the ombudsman for children is the first in the world and a pioneer in the field of protection of children’s rights. The institution was set up in 1981 and its main goal is to monitor the interests of the children at all levels in society and to propose changes in public policies and attitudes, where necessary.

The representative of UNICEF in Bulgaria Maria Jesus Conde, members of parliament, representatives of the executive and NGOs took part in the discussion.

Before that the Chairperson of the National Assembly Tsetska Tsacheva had talks with the ombudsman for children of the Kingdom of Norway Anne Lindboe.  Tsetska Tsacheva noted at the meeting that Bulgaria has more than 20 statutory acts regulating the rights of children in different horizontal policies. In 2012 work on the codification of these acts began but it is not complete yet, said the Chairperson of the Parliament, and expressed assurance that the members of parliamentary committees and representatives of NGOs will continue their work on it.

The ombudsman for children of the Kingdom of Norway Anne Lindboe stated that she is impressed with the work of the Bulgarian ombudsman and pointed out that the two institutions have many common aspects of their work.