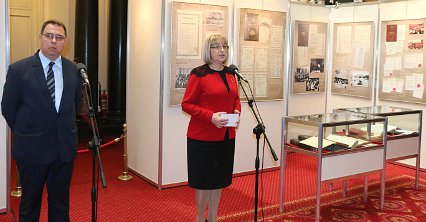 The Chairperson of Parliament expressed gratitude to the State Archives Agency, the National Church Museum of History and Archeology, the Regional Museum of History of Veliko Tarnovo and Klisura Monastery “St. Cyril and St. Methodius”.
We could call this exhibition a panorama of the Bulgarian parliamentarism, noted at the opening of the exhibition  the Chairperson of the State Archives Agency Ass. Prof. Mihail Gruev. He stated that in order to gather the documents, photos and artifacts in one place the efforts of several institutions were united.

The exhibition shows the great treasures of Bulgarian parliamentarism and Bulgarian democracy – the original of the Tarnovo Constitution, along with the chairperson’s bell of the Constituent Assembly and its two most important amendments – one related to the religious denomination of the Crown Prince and the so-called Silver Constitution of 1911, when the title of the ruler was changed from “prince” to “tsar”, stated Ass. Prof. Mihail Gruev. Here are the originals of the two constitutions of the communist era of 1947 and 1971, which are kept in the archives of the National Assembly, and the original with the signatures of the deputies from the Seventh Grand National Assembly of 1991, he added.


The exhibition includes 12 notice boards dedicated to the Constitution of the Republic of Bulgaria. In four window displays the originals of the Bulgarian constitutions are featured, including the famous “Silver Constitution”.

The bishop’s mitre and crozier of Anthim I are also among the exhibits in the exhibition. It features clerical garment, liturgical books and holy attributes, provided by Klisura Monastery. 16 notice boards trace back the life and work of Anthim I, the events related to the fight for creation of the Bulgarian exarchate and the work of the Constituent Assembly after 1879.