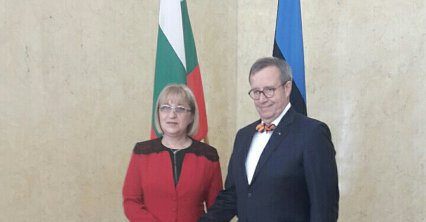 Bulgaria and Estonia are friends and allies in times of difficulties and challenges, stated the Estonian head-of-state. In his opinion, it is extremely important for the two counties to stand by the fundamental principles of freedom, democracy and the rule of law.
The President of the National Assembly Tsetska Tsacheva said that the hot topics on the agenda of Europe were also on the agenda of the Bulgarian parliament and government. In her words, the upcoming presidency of the Council of the EU is the greatest responsibility for Bulgaria and Estonia. The President of the National Assembly stated to the Estonian head-of-state her satisfaction with the agreement reached on a mechanism for constant dialogue and interaction between the Estonian and Bulgarian parliaments during the preparation of the parliamentary dimension for the presidency of the Council of the EU.

Tsetska Tsacheva stated that regional cooperation was important for the European security and stability policies, including its parliamentary dimension. She acquainted the Estonian President with the outcomes of the completed a day ago Third Plenary Session of the Parliamentary Assembly of the South East European Cooperation Process and underlined that the beginning of that process for peace and cooperation was given 20 years ago in Sofia.

The problems with migration require pan-European solutions and solidarity among all countries, said the President of the National Assembly, and added that the EU borders need be efficiently controlled. The membership of Bulgaria and Romania in Schengen, for which we have met all criteria, will mean a more secure Europe, emphasized Tsetska Tsacheva.

The Estonian President expressed the definite support of his country for Bulgaria’s accession to Schengen.

Toomas Hendrik Ilves and Tsetska Tsacheva were unanimous on another important topic – efforts are needed for building a single digital market in Europe, to become a source of growth and competitiveness. The desire of the two countries to extend and elaborate their cooperation in trade and economic relations, in the fields of investments, culture and education was confirmed in the talks.
The chairman of the Friendship Group Estonia - Bulgaria Valeri Zhablyanov, the chairman of the Transport, Information Technologies and Communications Committee Nastimir Ananaiev and the deputies Stefan Zhelev and Boris Yanchev are members of the Bulgarian delegation.