National Assembly
of the Republic of Bulgaria
News
We are ready to work for development of bilateral relations between Bulgaria and China, said the Chair person of the Shanghai Municipal People’s Congress at a meeting with the President of the National Assembly Tsetska Tsacheva 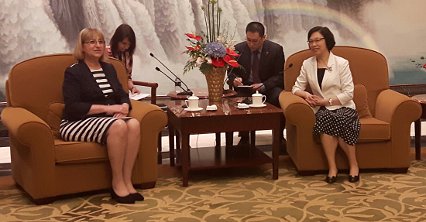 We are ready to work for development of bilateral relations between Bulgaria and China, said the Chairperson of Shanghai Municipal People’s Congress Yin Yicui  at a meeting with the President of the National Assembly Tsetska Tsacheva. The Bulgarian parliamentary delegation, which is on an official visit to China, visited the biggest trade and economic centre in the country, Shanghai.

I am convinced that your visit will foster cooperation between the legislative bodies of the two countries, noted Yin Yicui  before the Bulgarian deputies. Shahghai is a huge city with a population of 24 million people, which is developing very fast in economic terms, she said.  In the recent years we have been making efforts to raise the standard of living of its citizens and improve the city environment, added the Chairperson of Shanghai Municipal People’s Congress.

Bulgaria and China have excellent political relations, the dialogue between the legislative institutions is at a high level but it is also important to develop contacts between  representatives of the local authorities, noted the President of the National Assembly. Tsetska Tsacheva expressed assurance that cooperation between Sofia and Shanghai will continue to develop further, that Sofia and Shanghai will become twin cities.

Earlier in the day the President of the National Assembly and the parliamentary delegation led by her had talks with the President of the Chinese company CEFC Chan Chauto. The company is one of the most dynamically developing in China, the biggest in Shanghai and eighth largest in the country and its primary business is in the field of energy. This company has already shown interest to invest in different sectoral policies in Bulgaria and today it confirmed its interest, said Tsetska Tsacheva.

The President of CEFC Chan Chauto pointed out that Bulgaria was a country with great potential and opportunities existed for common business between Chinese and Bulgarian companies.
Bulgaria is a good place for investment and our partners in China already know this, pointed out the President of the National Assembly. According to Tsetska Tsacheva, there should be a close tie between the representatives of Bulgaria and China and in case of stated interest by a Chinese company they should provide information about the projects our country is set to implement. We should avail of the opportunities and interest shown by China towards Bulgaria, she added.

Included in the delegation, which is  on a visit to China, are the Deputy Presidents of the National Assembly Yanaki Stoilov, Krasimir Karakachanov and Yavor Notev, the Co-chairman of the Friendship Group Bulgaria – China Dimitar Boychev, the members of the Friendship Group Bulgaria – China Dzeyhan Ibryamov, Borislav Milanov and Rosen Petrov, the Chairman of the Defence Committee Miho Mihov, the Deputy Chairperson of the Culture and Media Committee  Irena Sokolova and the Minister of Regional Development and Public Works Lilyana Pavlova.