National Assembly
of the Republic of Bulgaria
News
The President of the National Assembly Tsetska Tsacheva opened an exhibition of geographic maps, engravings and lithographs on bogomilism in the Bulgarian lands 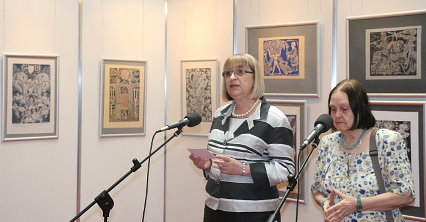 The graphic cycle “The Bogomils” features graphically “the history”, life and ideas of the bogomils, the President of the National Assembly stated at the opening. Tsetska Tsacheva said that it reconsidered underlying assumptions of Christian dogmas by giving new interpretations of the world, the man and salvation. As a social movement bogomilism gives an extremely critical viewpoint on the state and the church as the position of “the oppressed and abused” by power, who are deprived of any perspective for their existence, she added.

Bogomilism is not a sect but a new way of thinking and action, stated the President of the National Assembly. I hope everybody will enjoy this exhibition and find his/her own way to the knowledge of truth and the meaning of life, Tsetska Tsacheva added.

Ivan Velchev from “Iliya Beshkov” Art Gallery of Pleven pointed out that the exhibition was part of the 140 graphic sheets donated by the artist Violeta Grivishka to the gallery in 2011. The exhibition has already been presented in Budapest, Prague, Warsaw, Bratislava, Vienne and many other galleries in Bulgaria, he stated.

I have dedicated about 50 years to research and inner concentration to reach the deep  spiritual essence of bogomilism, Violeta Grivishka said at the opening of the exhibition. She pointed out that bogomilism was an exceptional manifestation of the spirit of Bulgarians, who had spread that Christian-based teaching.

The author of the exhibition Violeta Grivishka was born in Pleven and graduated the Academy of Art in Sofia as a student of Prof. Evtim Tomov. She has over 30 independent exhibitions in graphics, painting, water colour, ceramics.