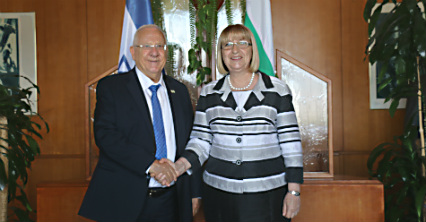 In the recent years, state and political relations between Bulgaria and Israel have been extremely intensive and of strategic nature and importance, said the President of the National Assembly Tsetska Tsacheva at her meeting with the President of Israel Reuven Rivlin. Our friendly relationships are deeply rooted back in history and we, the contemporary statesmen and politicians, are obliged to further develop them, said the President of the Bulgarian Parliament. Tsetska Tsacheva added that the two countries should also work together for addressing the many challenges we were facing today.

Tsetska Tsacheva assessed as extremely important the conduct of bilateral joint meetings of the governments of the two countries. She expressed her belief that the third intergovernmental meeting to be held in Bulgaria this year would give a practical dimension to the partnership in many areas.
Cooperation with Israel is of strategic importance – particularly in the areas of security, investment, exchange of goods, agriculture, health care, science and education, Tsetska Tsacheva noted. The two of them expressed assurance that Bulgaria and Israel would pro-actively work for the implementation of specific projects in the above-mentioned areas.

The President of the National Assembly added that it was extremely important for Bulgaria to attract Israeli investments because very good conditions existed for them.

Later in the day Tsetska Tsacheva attended the official ceremony for the inauguration of the “Memorial of Gratitude and in Memory of the Victims of Holocaust” in front of the “Academia” Gallery of the National Academy of Art.