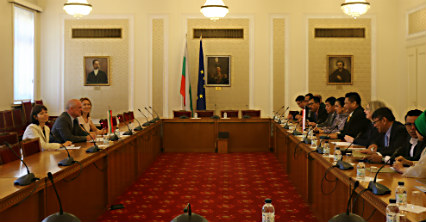 The Deputy President of the National Assembly acquainted his Indonesian colleagues with the structure of the Bulgarian state system, which was of utmost interest to them. Dimitar Glavchev and Ridwan Hisjam recalled that friendly relations between Bulgaria and Indonesia dated back for over 60 years and there were many reasons for their further development. In the words of Hisjam, who is also a member of the Education Committee, the two countries may work on further strengthening of cooperation between the two parliaments, between the governments and businesses.
Dimitar Glavchev acquainted his colleagues with Bulgaria’s success in combating smuggling and illegal migration.