National Assembly
of the Republic of Bulgaria
News
The National Assembly observed a minute’s silence in memory of the victims of the terror attack in Nice, killing over 80 persons and injuring many citizens 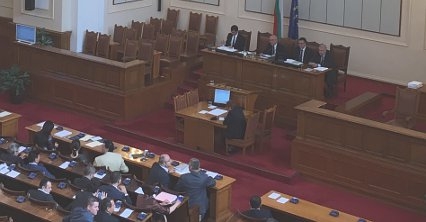 The deputies observed a minute’s silence in memory of the victims of the terror attack in Nice, where over 80 persons have been killed and many have been injured.

The National Assembly strongly condemns any form of terrorism and we state our determination for an uncompromising fight against all acts of violence against innocent people, the Deputy President of Parliament Dimitar Glavchev stated at the beginning of the plenary sitting today.
“We were deeply saddened by the news about the barbarous terror attack in Nice on the national holiday of France, in which tens of innocent citizens were killed. This is another severe and inadmissible violence, which is inconsistent with the values of our modern world. In this though moment, we express our solidarity with the friendly French people, we mourn the victims and we have empathy for the grief of their families and relatives”, said Dimitar Glavchev. We do believe that the world democratic community will be ever more united in dealing with the greatest threat to the modern world, he added.

Wee are deeply mourning the innocent victims but along with the solidarity and empathy we feel we have to say something more – a new, political action is needed without delay, without delay we have to stand together in the fight against terrorism, said Tsetska Tsacheva.
Bulgaria resolutely condemns this barbarity as a gross violation not only against the French country but against the whole democratic world, the President of Parliament wrote.

France is immersed in tears but I believe that a great nation will find the strength to combat brutal terrorism and bloody barbarity that marked the Bastille Day in France, the condolence letters read.