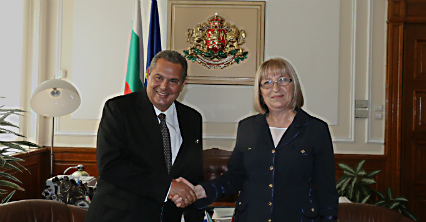 Tsetska Tsacheva recalled that Bulgaria insisted on common European policy and solidarity among all countries in dealing with the refugee crisis. The trilateral agreement between Bulgaria, Greece and Turkey on police and customs cooperation provides a sound basis for further coordination and joint work, she added.

Development of bilateral relations between Bulgaria and Greece and the role of parliamentary diplomacy in highlighting the priority areas of cooperation were among the main topics of the meeting.

Cooperation between Bulgaria and Greece is excellent, based on friendly, union and partnership relations between the two countries, which are developing extremely dynamically and fruitfully, the President of the National Assembly said. Tsetska Tsacheva underscored that the common positions of the two countries in EU and NATO were a good basis for further strengthening of the traditionally good bilateral relations. The close and active contacts between the representatives of Bulgaria and Greece in various sectoral policies are very efficient, she noted. The President of Parliament added that she expected the third joint meeting of the two governments on 1 August 2016 to produce new specific results.

Tsetska Tsacheva noted the role of the parliaments of Bulgaria and Greece for development of bilateral relations. Parliamentary diplomacy is the basis that outlines defence policy, regardless of the shift of specific ministers, the Minister of the National Defence of Greece Panos Kammenos stated. He underscored that Bulgaria and Greece were the steel shield for the stability in the region and the close cooperation between the two countries was the assurance of its security.

The President of the National Assembly expressed gratitude for the Greek support of Sofia’s candidacy for hosting the seat of the Permanent Secretariat of the SEECP Parliamentary Assembly (SEECP PA). Bulgaria as initiator and active participant attaches high importance to the parliamentary dimension of SEECP and considers the format an important factor for promoting the stability and cooperation in the region, Tsetska Tsacheva pointed out.
The Minister of the National Defence of Greece Panos Kammenos extended an invitation for holding a meeting between the deputies of the defence committees of the two countries’ parliaments.