National Assembly
of the Republic of Bulgaria
News
131 years ago our ancestors accomplished a courageous stately political act without precedent in the Balkans and Europe, the President of the National Assembly Tsetska Tsacheva stated at the formal celebration of the Unification in Plovdiv 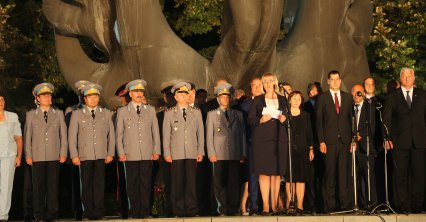 131 years ago our ancestors accomplished a courageous stately political act without precedent in the Balkans and Europe, the President of the National Assembly Tsetska Tsacheva stated at the formal celebration of the Unification of the Principality of Bulgaria with East Roumelia at Unification square in Plovdiv.

Every year we celebrate the 6th of September as the date on which the Bulgarian people expressed their will in a determined and unhesitating manner for the unification of East Roumelia and the Principality of Bulgaria, despite the status quo imposed by the Great Powers, Tsetska Tsacheva pointed out in her speech. In her words, after the proclamation of the Unification it convincingly became clear that the Unification was the deed of the whole Bulgarian people – even those who had been against it shared the people’s joy, the delight in the Principality was sincere, and the prince recognised the deed, irrespective of the international complications.

We should remember that when we are united our goals are achievable – in that is the greatness of the Unification, added Tsetska Tsacheva.

The solemn tattoo began with acceptance of the guards of honour of the Ground and Air Forces units of the Plovdiv garrison by the President of Parliament Tsetska Tsacheva.

Before the solemn part, an exhibition was opened in the Unification hall of the Museum of History under the motto “Plovdiv on the way to modernity”. The exhibition is dedicated to the city’s history from the Liberation in 1878 to the second half of 20th century.
Flowers were laid in front of the Unification monument on behalf of all state institutions, representatives of the local authorities, political parties and public organisations, dozens of people. A ten-minute tattoo illuminated the skies of Plovdiv.