National Assembly
of the Republic of Bulgaria
News
Amendments to the Ministry of Interior Act submitted by the government were deliberated in the National Assembly by deputies, representatives of the management and trade unions of the ministry 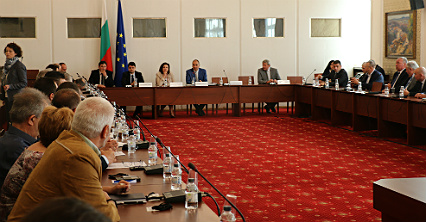 Amendments to the Ministry of Interior Act submitted by the government were deliberated in the National Assembly by deputies of the Internal Security and Public Order Committee, representatives of the political and professional management and trade unions of the ministry.

The amending and supplementing bill was submitted to the Council of Ministers on 23 February 2016 and was adopted on first reading by the National Assembly on 3 June 2016. The amendments are to be deliberated on second reading by the Internal Security and Public Order Committee.

The Chairperson of the Internal Security and Public Order Committee Tsvetan Tsvetanov recalled that the bill amending the Ministry of Interior Act provided for serious modifications which caused political tension and tension within the Ministry of the Interior. In March the Commission organized a discussion and in the deliberation by the National Assembly on first reading we took a commitment to discuss changes in the bill between first and second reading, he specified. In his words, the system will calm down with the proposals made in the bill between first and second reading.

In response to the criticism by deputies that half of the amendments proposed by the Council of Ministers will drop from the bill, Tsvetan Tsvetanov said that maybe half of the changes would not be accepted but this was the result of the coordination and dialogue built during the deliberation of the bill. We want to stabilize the system and enable the employees to work and know that what was achieved as a consensus by all parliamentary groups would not change at least in the forthcoming years, he added.

The Deputy Prime Minister and Minister of Interior Rumyana Bachvarova thanked all deputies who had supported the bill on first reading. She underscored that the draft amendments were based on the understanding that the Ministry of Interior should be an institution adequate to the present challenges. The migration crisis and the enhanced terrorism threat are new challenges which in combination with the usual ones require adequate response so that the Ministry of Interior and all security services could handle them, said Rumyana Bachvarova. In her words, the proposed amendments reflect the responsibility for making the system work better and in the interest of citizens and the country.

The proposed amendments to the Ministry of Interior Act extend the powers of Chief Directorate “Combating Organized Crime”, the Special Courier Service is transferred to the State Security and Information Commission and the status of the MoI Academy and training centres is preserved because we are aware that training is crucial for the formation of a policeman, noted Tsvetan Tsvetanov. Employees with police powers and guards of MoI buildings  may already be replaced by persons working under employment contracts and extra work may be performed above the  prescribed limit of 280 hours per annum but only with the explicit consent of the respective employee. The proposal for reducing the paid annual leave to 12 days will be withdrawn and the status-quo will be preserved, the Chairperson of the Internal Security and Public Order Committee stated.

The amendments provide for establishing a State Undertaking “Centre for Provision of Services” with a status of a state-owned enterprise under art. 62, paragraph 3 of the Commerce Act. It will be entrusted with certain unusual for MoI functions in relation to provision of administrative services. The proposal of Chief Directorate Fire Safety and Civil Protection for its transformation into a Fire Safety and Civil Protection Agency will be withdrawn.