National Assembly
of the Republic of Bulgaria
News
Bulgaria and Italy have similar positions on the future of EU and on addressing the challenges it faces, the President of Parliament Tsetska Tsacheva and the President of Italy Sergio Mattarella stated at their meeting 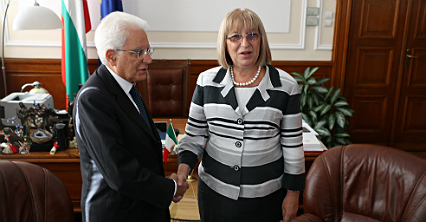 Bulgaria and Italy have similar positions on the future of EU and on the ways of addressing the challenges it faces, the President of Parliament Tsetska Tsacheva and the President of Italy Sergio Mattarella stated at their meeting at the Bulgarian Parliament. The Italian President is on a formal visit to Bulgaria at the invitation of the head of state Rosen Plevneliev.

Bulgaria has been committed and actively preparing for the upcoming EU presidency and will rely on the experience of the countries with successful chairmanships, including Italy, noted the President of the National Assembly. Tsetska Tsacheva underscored that acceleration of the preparation for Bulgaria’s presidency was needed in view of the earlier date for its assumption.

Italy is ready to provide its experience in regard to the presidency of EU, noted the President of Italy Sergio Mattarella. He highly appreciated the development of bilateral relations, defining them as very special and important. This is so because Italy and Bulgaria have a common vision on the future of EU and similar positions on the problems in the Union and the ways of addressing them, added the Italian President.

It is important to continue the successful development of the existing contacts between the legislative institutions of the two countries as they play a key role not only in strengthening the bilateral relations but also for the fruitful work with the EU, Sergio Mattarella emphasized.

The President of the National Assembly Tsetska Tsacheva underscored that the visit of the President of Italy would give a new momentum to the development of the bilateral, traditionally good and friendly relations between the two countries. Contacts between our parliamentarians are well developed and the active dialogue between the friendship groups is the basis for a successful joint work in the framework of international parliamentarian fora and meetings like the upcoming European Conference of the Presidents of Parliament in Strasbourg.

One of the main topics discussed at the meeting was the migration wave and the challenges posed for the EU. Bulgaria is an external border of the Union and this is a major problem for us, on which we are working with the clear understanding of the responsibility we have, the President of the National Assembly pointed out. Tsetska Tsacheva noted that the government had an ongoing commitment for the reliable safeguarding of the border security, and the Bulgarian Parliament had taken legislative measures pertaining to the new challenges we were facing.

No EU Member State is capable of coping with the situation alone, the Italian President and the President of the National Assembly were adamant on that point. Today more than ever we need not only declarative support but concrete help for the protection of our border because the huge refugee wave poses a risk not only for Bulgaria but for entire Europe, Tsetska Tsacheva emphasized. The problem with the migration flow requires comprehensive and adequate responses, Sergio Mattarella stated. In his words, the refugee wave, combating terrorism and countering economic and financial difficulties within the EU require from the Union to have a single and strong policy for coping with the problems. The EU should actively seek to resolve them, he added.