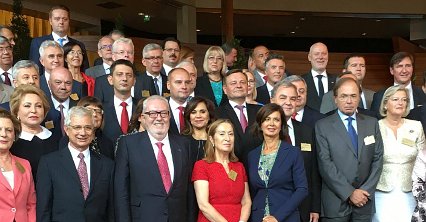 The President of the National Assembly Tsetska Tsacheva will make a statement on the first theme to be discussed by the participants, “The migration and refugee crisis in Europe – role and responsibilities of national parliaments”. The second theme to be discussed is “National Parliaments and the Council of Europe: Together promoting democracy, human rights and the rule of law”.

In the second day of the conference the participants will have a discussion on the issue: “Mobilisation of Parliaments against hate, for inclusive and non-racist societies”. The key speakers will be Norbert Lammert, Speaker of the German Bundestag, and Anne Brasseur, Ambassador of the Council of Europe’s “No Hate Speech” movement.    .

The Head of the Delegation of the National Assembly to the Parliamentary Assembly of the Council of Europe and Chairperson of the Foreign Affairs Committee Dzhema Grozdanova also took part.

The European Conference of the Presidents of Parliament in Strasbourg was opened on the day when the International Day of Democracy, 15 September, is celebrated.

The first European Conference of the Presidents of Parliament was held in 1975. The forum is held every two years in Strasbourg or in a capital of a Council of Europe member state.