National Assembly
of the Republic of Bulgaria
News
Students from the UNWE entered the National Assembly as interns in the Committee on Anti-Corruption, Conflict of Interests and Parliamentary Ethics 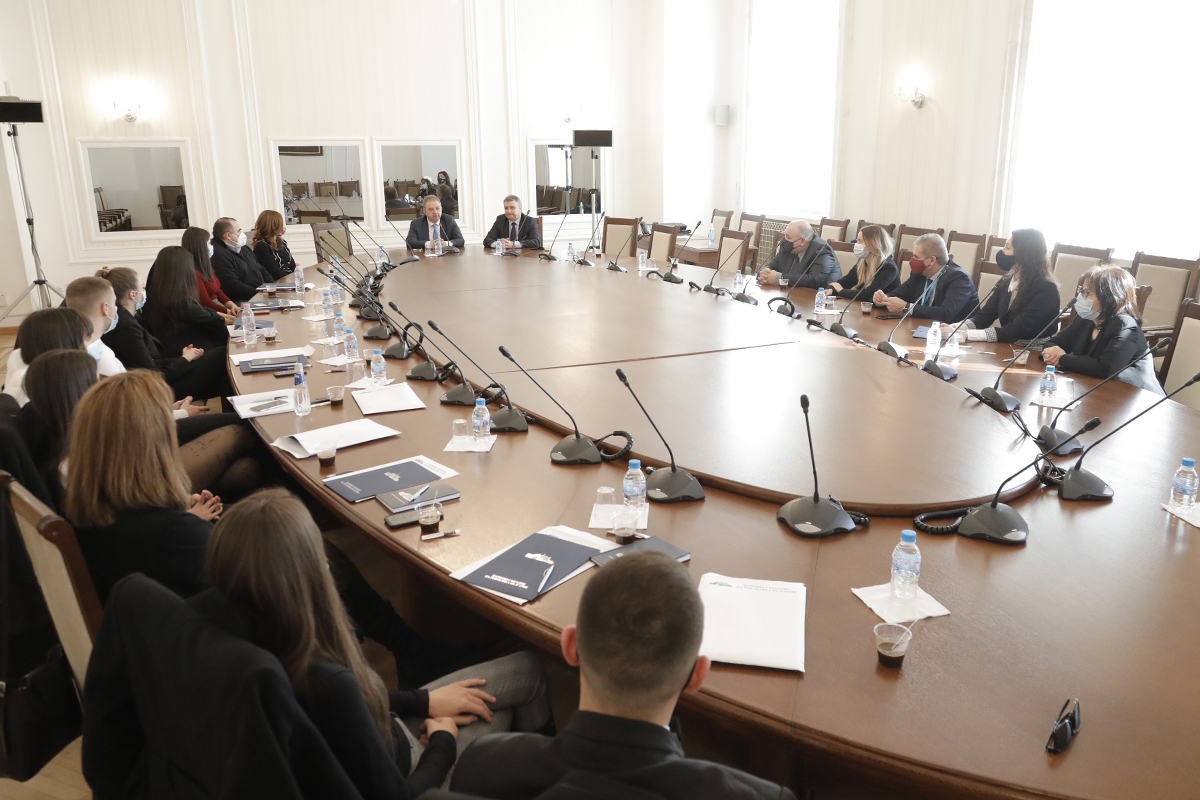 Students from the University of National and World Economy joined as interns the Committee on Anti-Corruption, Conflict of Interests and Parliamentary Ethics of the 44th National Assembly today. Its chairman – the MP from NFSB Boris Yachev, welcomed them.
Official guests at the start of the internship programme were the Rector of the UNWE Prof. Dr. Dimitar Dimitrov. Assoc. Prof. Georgi Petrunov and Gergana Kirilova, Director of the Rector’s Office.
Boris Yachev announced that for two weeks the young people will be able to monitor directly the work of the MPs – both in plenary and during meetings of the Anti-Corruption Committee. They will gain experience together with the experts in examining the reports of suspicions of various corrupt practices and conflicts of interest submitted by citizens and NGOs.
The “Anti-Corruption Academy” initiative was launched in 2017 and was welcomed with interest by the young people. On 23 July 2020 the Chairman of the Counter-Corruption and Unlawfully Acquired Assets Forfeiture Commission (KPCONPI) Sotir Tsatsarov, the Rector of the University of National and World Economy Prof. Dr. Dimitar Dimitrov, the Ombudsman of the Republic of Bulgaria Assoc. Prof. Dr. Diana Kovacheva and the Chairman of the Committee on Anti Corruption, Conflict of Interests and Parliamentary Ethics at the 44th National Assembly Boris Yachev signed a new Memorandum of Cooperation.
Under this Memorandum, they agreed to implement a series of joint activities within the framework of the “Anti-Corruption Academy” initiative. A specific step of this initiative is to conduct student internships.
The practical training is for students from the UNWE with at least a second year completed, from Bachelor’s and Master's programmes in the professional fields: “Law”; “Economics”; “Administration and Management”; “Sociology” and “Political Science”.
Boris Yachev addressed the students today, “I believe that these two weeks in the Parliament will not only be of interest to you, but also of direct benefit, they will bring you experience, which is extremely important for your education”.
The Rector of the UNWE Prof. Dimitar Dimitrov thanked all partners in the initiative, expressed his confidence that it will develop despite the difficulties and the constraints imposed by the pandemic. “We were able to actually start the student internships, despite the difficult times. This is called political will to do the things,” emphasised Prof. Dimitrov.
The students will receive a certificate for their internship at the National Assembly.