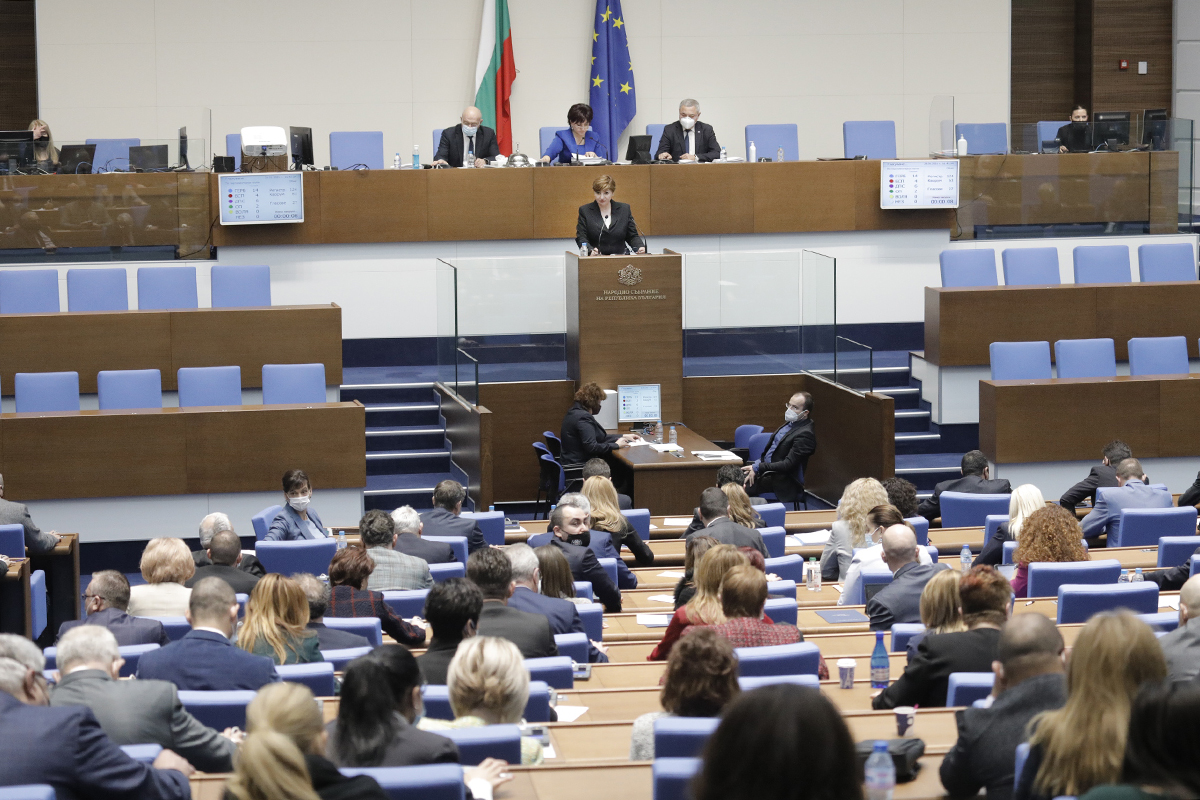 The National Assembly voted unanimously with 75 votes in favour of a draft decision for awarding state cash prizes to deserving Bulgarian artists for special merit to the Bulgarian state and nation.
The state cash prizes will be awarded for a period of 3 years. The implementation of the decision was entrusted to the Minister of Culture. According to the adopted text, 40 of the awarded artists will receive a prize of 500 BGN and another 23 – of 350 BGN.
The MPs approved at second reading amendments to the Energy Efficiency Act, which transpose the provisions of the adopted in 2018 Directive (EU) 2018/844 of the European Union. The Parliament decided that by 2027 the devices for heat allocation should be replaced by remote controlled ones, which would allow for monthly invoices. The provisions for the monthly invoices shall enter into force from 1 January 2022. Until then, the billing information will be provided to the end-users at least quarterly upon request or when the end-users have chosen to receive electronic invoices and, in other cases, twice a year, provided that all measurement devices in the building are remotely readable.
The Parliament adopted the Industrial Parks Act at second reading. The act regulates the status of the industrial parks, the conditions and the procedures for their creation, construction, operation and development.
The National Assembly adopted the report on the activities of the Counter-Corruption and Unlawfully Acquired Assets Forfeiture Commission (KPKONPI) for 2020. In total, 235 decisions to open proceedings were adopted during the reporting period. The sums of future claims under these proceedings amount to about BGN 467 million. The secured property is worth approximately BGN 219 million, according to the report of the Anti-Corruption, Conflict of Interests and Parliamentary Ethics Committee.
The Parliament finally adopted at second reading amendments to the Health Insurance Act proposed by the Chairperson of the Healthcare Committee Daniela Daritkova (PP GERB).  According to them, in carrying out the control of the NHIF budget, the National Audit Office (NAO), in its report under the National Audit Office Act, shall also express an opinion on the manner of implementation of the mechanisms ensuring the predictability and sustainability of the budget of the Fund and the methodologies for their implementation.
The Audit Office shall send the report to the Minister of Health for information. On the basis of the document, he may propose to the NHIF Supervisory Board an amendment and/or a supplement to the mechanisms ensuring the predictability and sustainability of its budget and the methodologies for their implementation.
The Parliament voted that, exceptionally, in 2021, in the event of a declared state of emergency due to an epidemic spread of infectious diseases or in an emergency epidemic situation, the mechanism ensuring the predictability and sustainability of the budget of the Fund shall not apply to medicinal products derived from human plasma or from human blood – immunoglobulins, included in the Positive Drug List. These are medicines paid in full or in part for domestic treatment on the territory of the country, as well as in hospital medical care outside the value of the medical services provided. The expenditures of the NHIF in these cases, when they are above the assigned target funds in its budget for 2021 and taking into account the share of the reserve, are not recoverable by decision of the Supervisory Board from the marketing authorisation holders to whom the mechanism applies.
The Parliament assigned to the National Audit Office an audit of the compliance in the conclusion and the implementation of contracts under the Public Procurement Act by “Montazhi” EAD for the period from 1 January 2017 to 31 December 2020. The proposal was made by PP BSP.
The MPs voted at first and second reading amendments and supplements to the Bulgarian Telegraph Agency (BTA) Act, submitted by Vezhdi Rashidov and Toma Bikov – PP GERB. The BTA is envisaged to distribute information of public interest free of charge.
The Agency shall ensure the free distribution and the free access to its products within one year of the entry into force of the amendments.
The Parliament adopted amendments to the Recognition of Professional Qualifications Act. The draft act voted at second reading, proposed by the Council of Ministers, aligns the provisions of the national legislation in the field of recognition of professional qualifications with the changes which have taken place in the European Union legal acts.